Linn aldermen to give ATV/UTV permit a trial run

Linn aldermen will begin putting together plans for an ATV/UTV ordinance to be presented at the July meeting. Last Tuesday’s meeting included citizens in favor of being able to use their …

Linn aldermen to give ATV/UTV permit a trial run

Linn aldermen will begin putting together plans for an ATV/UTV ordinance to be presented at the July meeting. Last Tuesday’s meeting included citizens in favor of being able to use their ATV/UTVs within city limits.

City resident Levi Elliot, who had brought the idea up at a board meeting several months ago, debunked the issue that the ATV/UTVs would be a noise problem in the city limits.

Elliot had done some research on decibels of different items that are typical in cities and found that, according to Temple and Perdue universities, most ATVs/UTVs would have from 85 to 110 decibels when running at 35 miles per hour. The research also showed that lawnmowers produce 90 to 110 decibels, semi-trucks 93 decibels, and motorcycles between 95 and 110 decibels.

“If we’re being honest, the majority of State Tech students’ trucks probably are over 110 decibels,” Elliot said. “So, the noise is not nearly as big of a concern as everyone thinks it is.”

City resident Brad Baker reached out to Elliot after his last visit with aldermen and had researched ATV/UTV permits in other cities.

“I’m just going to start by saying who here likes to make money?” Baker said. “I’m serious because the economic impact to our little city is huge with the potential development of this permit.”

Baker went on to list area businesses that may see an increase in sales if ATV/UTV permits are allowed on city streets. Baker also pointed out that residents may save on fuel bills when running errands because ATVs/UTVs are more energy-efficient than most trucks and SUVs.

“Now, some of this is hypothetical since we don’t have a permit, so we don’t have data to show if there is an increase in sales,” Baker admitted.

He noted that the city would see revenue increases from permit sales. Baker suggested that a tourism route could be developed in Osage County that would encourage ATV/UTV owners to buy both city and county permits. He also suggested that Linn could become the starting point for poker runs and other charity events, and those participants would spend their money within the city limits.

“If we don’t have this, those potential people aren’t spending their money here, and I know I want to see our town grow,” Baker said.

He also believes that ATV/UTV permits will increase community morale and give people something to do, including State Tech students.

Baker isn’t too concerned with ATV/UTV riders not following the rules outlined in the ordinance, adding he believes that will be an issue for the police department.

“Let’s let the police police if there are any kind of issues,” Baker said. “If people are going to do things, they are going to do those things on their trucks and motorcycles. It doesn’t matter if it is an ATV/UTV.”

Baker’s proposal also set forth penalties for ATV/UTV drivers, including fines and the loss of their permits for a year.

Baker researched other cities and towns in Missouri with special permits for ATV/UTVs in their city limits, including Belle, Owensville, Union, Washington, Park Hills, Grain Valley, Eldon, Cameron, and Sullivan — to name a few.

“These are all towns that have some sort of city permit in place, and a lot of these towns are a lot bigger than ours,” Baker said.

He also called the Missouri Highway Patrol, which provided Baker with suggested requirements for an ATV/UTV ordinance. Baker noted that one of the most important things that should be covered by the ordinance is that everyone would need to have insurance. Baker also called several of the city offices and police departments that have ATV/UTV ordinances in place.

Baker said that in the state of Missouri, ATV/UTV owners are allowed to drive on any state highway if they are within three miles of their home, except within city limits.

“To me, we need to put this to a vote and put it to bed because I don’t know what we got to think about,” Baker said. “I have references that can be called. I put up a thing on Facebook that we would be talking about this tonight and look at the support that showed up, and that’s just the ones that came. I think there were like 70 people who said they were interested.”

“We have the support of our local police department,” Baker added. “I think that would go a long way on this.”

“Realistically, we’ve had a few people in the past who’ve fully licensed ATVs, and it was a problem,” Mayor Dwight Massey said. “That’s put a bad taste in people’s mouths, including mine. There are over 20,000 cars a day that go down Highway 50 and if we add slow-moving ATVs in there, think about that addition. That’s been my biggest concern.”

Baker and Elliot interjected that they couldn’t think of an ATV/UTV that didn’t go at least 35 miles per hour and that police departments in other cities did not see this as a concern.

“I don’t know that I have a solid reason to absolutely say we can’t do it,” Massey said. “I do have my reservations. Are we opening up a can of worms? Our responsibility is to everybody here. Not to 70 people but to 1,300.”

Massey noted that he has heard concerns both for and against allowing ATV/UTVs in the city limits.

He proposed that the city draft an ordinance that would be voted in as temporary and allowed to be permanent if the trial period goes well and there are no issues.

“Let’s dip our toes in and see what happens,” Massey said. “Let’s give it a little shot and see. If it doesn’t go stupid, it could just roll on into effect.”

“So even with all of the evidence from the other cities?” resident Scotty Dudenhoeffer asked. “We’ve got the same highways as Union. It’s a bigger town, and they are already doing it right now.”

Baker proposed having a vote immediately.

“No,” Mayor Massey said. “It has to be by ordinance, which has to be posted for the public. There are steps that have to be made. That is the reality.”

Area resident Annabelle Parkhurst asked aldermen how much money the county made off the ATV/UTV permits.

“I have no idea,” Massey answered.

“I bet they make a lot of money off of it,” Parkhurst said. She added that she has a county sticker and takes advantage of riding the county roads as much as she can.

“A Saturday afternoon getting your friends together to go for a ride is a great time,” Parkhurst said. “But I can’t get through this town, and if I can’t cross the highway, I can’t get to where I want to go.”

Massey noted that aldermen could work on drawing up an ordinance, and it could be presented at next month’s meeting.

“It is a big step, and I’m willing to start taking that step, but I’m also going to do it with caution,” Massey said.

He pointed to aldermen, noting that although he was the one talking, they were the ones that would be voting on the ordinance.

Aldermen Mike Montgomery and Rick Niewald immediately said that they were in favor of the ordinance.

“People are doing it anyway,” Niewald said. “I live on Benton Street, and I know there are at least eight to nine UTVs that go by my house every day.”

Alderman Bill Turner was on the fence, noting that he needed time to research existing state laws on ATV/UTV usage.

“I need to look up some state statutes before I make a decision,” Turner said.

Aldermen Steve Boeckmann is leaning in favor of an ATV/UTV ordinance but has some reservations.

“I kinda like what Dwight was saying about a little trial period because it is a big step,” Boeckmann said. “I talked to the mayor of Union and a police officer down there, and neither one of them like it. They cite safety issues.”

Massey noted that he appreciated all the time and effort everyone had put into the research and for coming out to the meeting.

“You guys have done a good job of presenting the information,” Massey said. “We’ll get to work on it.”

City Clerk Carrie Grellner will start drafting an ordinance that will be sent to City Attorney Kent Brown, aldermen, the mayor, and the police chief for review. The plan is to present the ordinance at the next meeting.

The Art House: Creative Collective combines imagination and skill under one roof

A legendary attitude in a new space

Winslow grateful for volunteers at the Osage County Fair 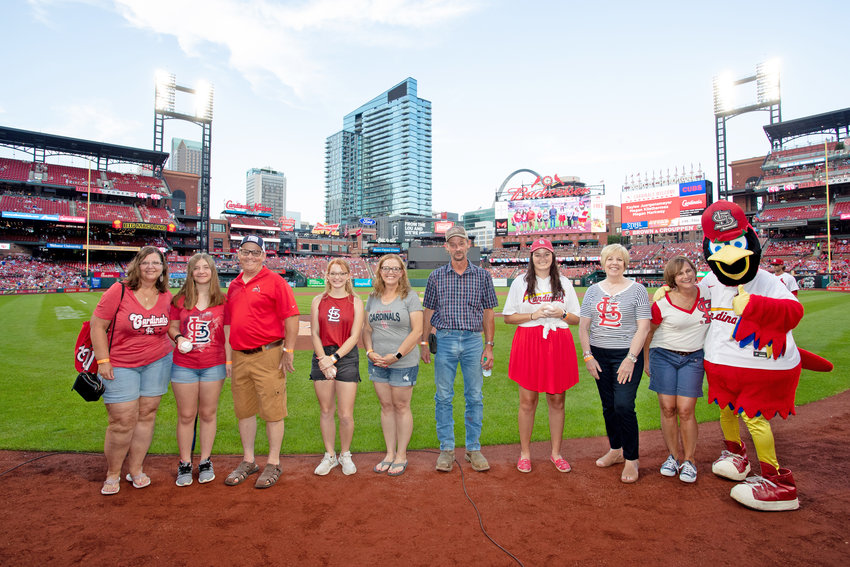 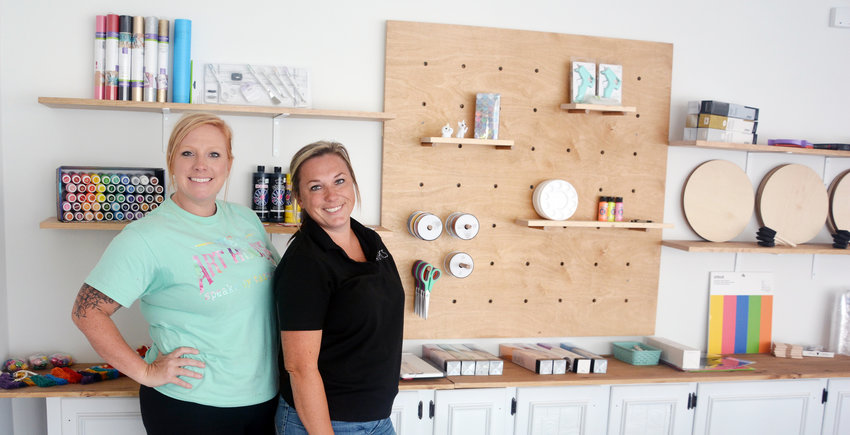 The Art House: Creative Collective combines imagination and skill under one roof
A creative environment for the Linn community is opening its doors for instruction and crafting parties beginning Aug. 12 and will operate regularly scheduled classes and other events by …
Argyle Car Show set for Aug. 13
Argyle trustees at their last meeting gave their blessing to the Argyle Knights of Columbus Car Show, which will be held on Aug. 13. Mayor Ryan Davis saw no issue with approving the event since it …