OSAGE COUNTY  — Sheriff Mike Bonham said the 39-page message in Amendment 3 is misleading in several ways and has deep concerns for how Missourians will proceed now that recreational marijuana use has been legalized by a thin margin, with 53.1% of voters voting yes on Nov. 8.

“I’m concerned about public safety,” said Bonham. “From a law enforcement perspective, this amendment handcuffs us in many ways. There will be constitutionally-protected situations under the amendment that will limit our response to certain situations.”

Following the amendment’s passage, recreational marijuana will become legal on Dec. 8, but dispensaries won’t begin selling it before February.

“That’s not a lot of time to prepare,” said Bonham, adding that rural areas were against the measure. “The organizers focused on bigger cities because they had a better chance to pass it. This is about nothing more than making money. If marijuana has a medical benefit, that’s fine, but making it legal for everyone creates difficulties.”

Businesses already selling medical marijuana — approved by voters in 2018 — will have the first opportunity to acquire recreational licenses.

Amendment 3 also creates a “micro-business” licensing program for smaller entrepreneurs and businesses, designed to help people to break into the market by selling or cultivating marijuana products on a smaller scale.

Entrepreneurs who meet certain financial or location criteria or come from families or communities that have been historically impacted by marijuana prohibition will have priority for the micro-license program.

All new license holders will be selected randomly by lottery.

However, business owners who plead guilty or were found guilty of a felony offense will be ineligible to sell or manufacture recreational marijuana. The Missouri Department of Health and Senior Services (DHSS) will oversee the new industry and licensing process.

While Missouri is the 20th state to legalize recreational marijuana, the Show Me State is the first to automatically expunge non-violent marijuana-related records.

Any person with a non-violent marijuana charge and who is not currently incarcerated — with the exception of those with charges for driving under the influence or selling weed to minors — will have their record reviewed and expunged by the courts by June 8, 2023.

According to the Legal Missouri 2022 website, similar programs in other states typically require those seeking to vacate convictions to first petition the courts, adding time and expenses.

Sealing those records could affect thousands of people’s access to employment, housing, and wages. Expungement will not apply to people with charges of violent crimes or whose offenses involved distribution to a minor or driving under the influence of marijuana.

Those still incarcerated will not automatically have their charges dropped or expunged. However, people with non-violent charges will be able to petition to be released from jail or prison or to be removed from parole and probation and have their records expunged.

“A Colorado sheriff warned us against a constitutional amendment,” said Bonham. “Can lawmakers amend it? I don’t know how that will work, if it’s even possible. These folks will spend a lot of money to defend it, and I expect to see a paradigm shift in the county.”

Local jurisdictions can opt out of adult-use retail marijuana sales through a vote of the people. At their November meeting, Meta aldermen discussed making the local park a “no-smoking” area for marijuana and will vote on the issue next month.

Legal Missouri 2022 proponents, in their push for legalization, noted that the amendment would allow governments to assess local sales taxes of up to 3% on top of the 6% state tax on retail sales of marijuana.

Bonham reviewed statistics posted on a Colorado state website, which showed the total number of marijuana arrests decreased by 68% between 2012 and 2019, from 13,225 to 4,290. This was driven by significant decreases in possession and sales charges, with a minimal (3%) increase in arrests for marijuana production.

The total number of marijuana-related court case filings declined 55% between 2012 and 2019, driven primarily by decreases in misdemeanors and petty offenses. The number of cases with a marijuana felony as the top marijuana charge has varied;  in 2020, there were 180 fewer felony cases filed than in 2012.

The federal Drug Enforcement Agency (DEA) Domestic Cannabis Eradication/Suppression Program, which targets drug-trafficking organizations involved in cannabis cultivation, made the highest number of arrests in 2018 and 2019 since legalization and seized the highest number of indoor plants (57,711) in the past 14 years. The number of outdoor plants the DEA eradicated has varied over that period, ranging from a high of 29,655 plants in 2009 to a low of 2,059 plants in 2017; they destroyed 4,247 outdoor plants in 2019.

In terms of traffic safety, Colorado saw an increase in law enforcement officers trained in recognizing drug use, from 129 in 2012 to 221 in 2020, which can increase drug detection rates apart from any changes in driver behavior.

“Most dogs trained since COVID do not test for marijuana,” he said. “The problem with dogs that have been trained in that they may alert on the marijuana, but that’s not going to be enough probable cause for a search.”

Sheriff Bonham outlined this scenario. “Suppose we stop a vehicle and determine he or she is under the influence of drugs based on a field sobriety test,” he said. “There’s no test like the breathalyzer to detect marijuana. If the vehicle is searched and we find meth, it’s going to be a nightmare in court.”

Shaffer agrees. “It would be difficult to say with certainty that the dog detected the meth since marijuana would be involved,” he said. “The dog can’t say he detected meth, so how do you justify the search?”

Deputies with advanced training to detect the presence of a drug through behavior and physiology during a field sobriety test are not common. “It’s an intense training that takes two weeks to complete,” said Shaffer.

Det. Vic Weir has returned to train deputies, but a blood draw is necessary to determine an individual’s drug level. “That requires a warrant, so again, we’re back to probable cause,” Bonham said.

Shaffer added that it might be possible to put deputies through a phlebotomy course so they can draw blood if a warrant is obtained.

In Colorado, the number of traffic fatalities involving a driver testing positive for any cannabinoid (Delta 9 or any other metabolite) increased by 140%, from 55 in 2013 to 132 in 2019.

Shaffer noted that he’s concerned about the long-term effects of marijuana use by underage people. “Does it stunt the development of the frontal lobe? Are there other health issues we need to address? I don’t know, but it seems that marijuana would have a negative impact on our youth,” he said.

In Colorado, there was a significant rate increase in marijuana-related emergency department visits during medical commercialization. The increase in visits continued after 2014, but that increase was reversed in 2019.

The number of calls to poison control mentioning human marijuana exposure increased over the past 10 years. There were 41 calls in 2006 and 276 in 2019.

The overall rate of treatment admissions for those reporting marijuana as their primary substance of use has decreased from 222 admissions per 100,000 population in 2012 to 182 in 2019.

Bonham added that in Colorado, there have been documented deaths among children related to marijuana. “We’ve seen gummy overdoses because the kids think it’s just candy and don’t know any better,” he said. “People are leaving them out where kids can get to them, and that’s not a good practice.”

In Osage County, Bonham said there have been two recent overdose deaths — both involving fentanyl —, and he is concerned that some marijuana could be laced with the opioid.

“Colorado has seen an uptick in black-market activity, and we could see that here as well,” Bonham said. “People can get it cheaper from a guy on the street than in a state facility, but they risk buying marijuana that has been altered.”

School discipline data for 2019-20 indicated that marijuana infractions accounted for 30% of all expulsions and 34% of all law enforcement referrals in Colorado public schools. These infractions are almost uniformly for simple marijuana possession.

Shaffer said that dogs trained in marijuana detection would be useful in school searches. However, it’s not cost-effective to maintain a drug dog with limited uses.

In the final analysis, Bonham said he’s not happy with the amendment, and based on Osage County voters overwhelmingly saying no, he’s frustrated.

“We’re conservative here,” Bonham said. “We don’t want to smell it or have it around our kids.”

News
State Tech to Invest $4 million in Agriculture Programs
LINN – State Tech’s application was ranked first among the 14 applications for $10 million in Missouri Agriculture Innovation Grants, and the Coordinating Board for Higher Education … 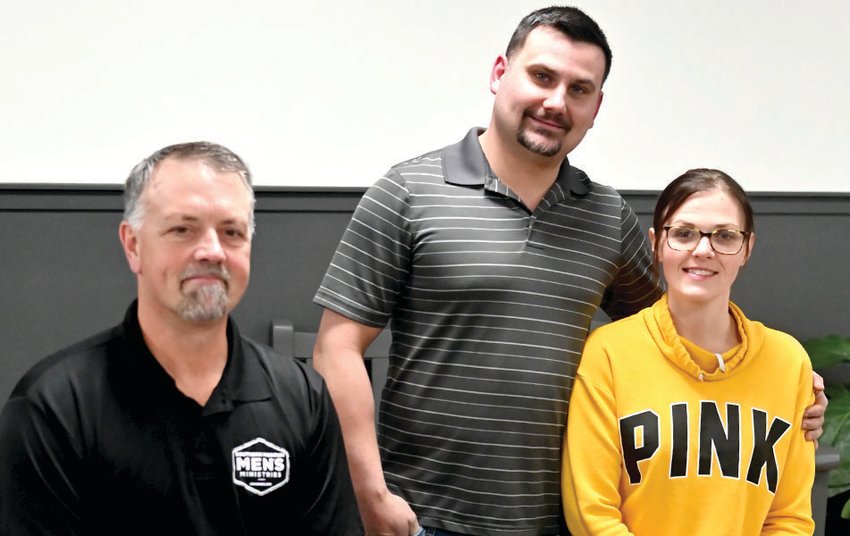 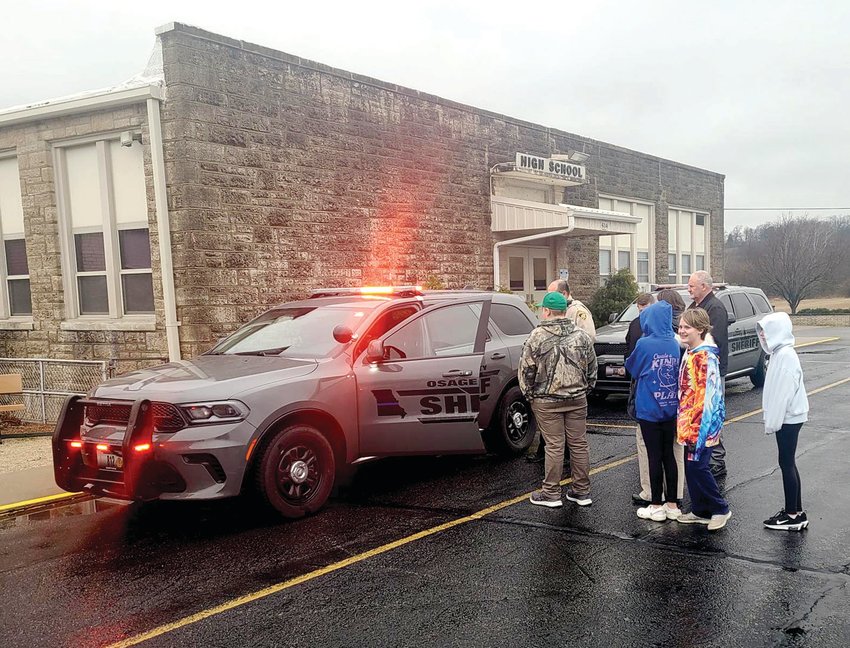 Junior Deputy vehicle day
Students at St. Mary’s and Chamois R-1 take a look at a sheriff’s patrol car on Wednesday of last week as part of the Junior Deputy Program’s vehicle day.
Berhorsts challenge city of Linn about paving
LINN — Dawn and Gary Berhorst confronted Linn aldermen and the mayor at their meeting last Tuesday night about why they were being singled out to pave the parking lot at the apartment buildings …